(Edit from the future: here are the links to part 2 and part 3).

The 2016-17 season has unveiled the greatest team in NBA history: The Golden State Warriors. Most fans would incorrectly argue that the ’96 Bulls hold that throne even though Jordan and Pippen were past their primes (Pippen just barely), their post play was insufficient, and their depth was undesirable. Bill Simmons in his The Book of Basketball also points to the watered down of talent in the league at that time (2010). Simmons might argue that the ’86 Celtics still reign as the greatest ever, and I must say, it makes for a very intriguing debate about time periods; however, the sheer dominance of the Warriors’ starters along with the productivity of their bench still convince me that no team could beat them in a seven-game series. 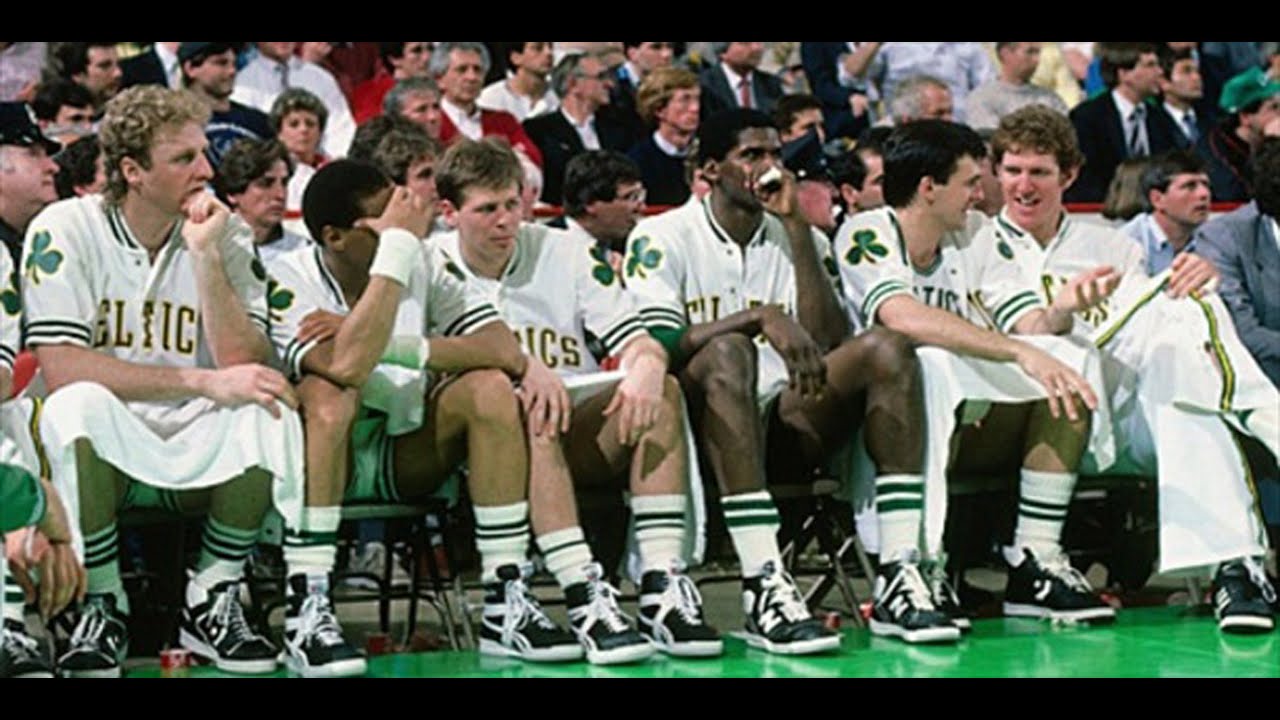 This post isn’t interested in debating which team is the best and why though. My interest lies in the team construction that makes a team dominant and successful. Why are the ’86 Celtics and ’17 Warriors regarded as the best? What do (did) they have that other teams don’t? And, of course, what could theoretically make them better? Ultimately, this theoretical framework will inform a forthcoming article (series?) where I construct the Second Tier Universe Cup Team. If you’re anything like me, you’ll find this new wrinkle more interesting than the first.

As I mentioned in a previous article where I criticized Team USA’s Olympic team after analyzing the best superstar duos and trios in history:

This lays a solid groundwork for showing what is required to be the best for superstars to mesh: at least a dominant scorer, multiple excellent defenders, and multiple above average playmakers with one excellent playmaker.

– Cody Houdek, “Building a Super Team and Other Observations,” 2016

The question now is broader and requires more definitions though because no theory (even basketball theory) is complete with pedantic definitions, so buckle up, and I promise that the end result of reading this series will be worth it for looking at basketball with a new perspective.

At their core, it seems that every basketball player can be boiled down to four distinct archetypes much like an RPG like “The Elder Scrolls.” These archetypes depend on four core skills: playmaking, scoring, defense, and rebounding. One can reduce each of these skills near infinitely to capture the myriad subtleties involved with the beautiful game, but I won’t spend much time doing that now. If you want a weird, philosophical dive into a Borgesian analysis of Ginobili’s creativity, then I urge you to read this and this article. I will try and differentiate a bit between very different skillsets within these archetypal skills such as offensive rebounding vs. defensive rebounding and off-ball shooting scorers vs. isolations scorers.

Just replace these with basketball terms, and you basically have what I’m talking about.

I have broken down each of these archetypal categories into a 0-10 scale where each number is associated with a tier of ability (again, like an RPG). This scale is as follows: Transcendent- 10-9; Elite – 8-7; Proficient – 6-5; Average – 4; Sub-par – 3-2; Inadequate – 1-0. I’ll discuss the meaning behind each of these a little later.

Is this an exact science? Oh goodness no, but it’s a good place to start when trying to define team building. My gut tells me, as I more simply stated in that aforementioned article, that successful teams have an abundance of playmakers and defenders, at least one player who can score at will, and adequate rebounding.

What does any of this mean? To me, a playmaker is a player that can create offense for his teammates. Most people look to assists to measure this, but the skill goes far beyond that. It includes players who help the offense function smoother through unselfishness and a skillset that draws their opponents’ attention. For example, players like Magic Johnson and Steve Nash score very high in this category because of how they can set their teammates up to make easy shots (they also post extremely high assist totals). Conversely, Stephen Curry and LeBron James would also score very high despite their average assist numbers because of their different abilities – Curry’s tremendous gravity and LeBron’s strength and IQ – promote teammate success. Essentially, if a playmaker is on the court, his team’s offense shouldn’t stagnate. We can differentiate playmakers in three ways: excellent passers who set up individual teammates for easy shots (let’s call them “Dime Droppers”), unselfish passers who don’t hold the ball too long during an offensive possession (let’s call them “Cogs”), and players who excel in both these categories (“Floor Generals”).

A scorer then is a player who can score the basketball. Groundbreaking, right, but the intrigue lies in the details. How do you compare a scorer like Dominique Wilkins and Peja Stojakovic? How do you compare Ray Allen with Tracy McGrady? How do you compare Shaq with Kobe? Differentiating these abilities is key to building a successful lineup because basketball is a game of diminishing returns meaning that the more players who both excel in a single skill and share the court with one another, the less the team will benefit from each individual’s skills (to me, this is the true beauty of the Warriors’ offense, and I will get to that later). If a team has five Carmelo Anthonys, every Carmelo won’t average 30 points per game on good efficiency. While we can definitely differentiate scorers into many many categories, let’s just stick to just a few for now: players who need the ball in their hands to create scoring opportunities (“Ball Dominant”), floor spacers who score efficiently off spot-up and other off-ball shooting possessions (“Floor Spacers” actually has a classic ring to it), and players who can either (or both) dive to the basket or run in transition for easy scoring opportunities (“Runners”), and the combinations of these skills (it’s tough coming up with names).

…basketball is a game of diminishing returns meaning that the more players who both excel in a single skill and share the court with one another, the less the team will benefit from each individual’s skills.

A defender is a player who makes it more difficult for the other team to score. By far, this is the most difficult to quantify statistically, and even with the advent of analytics, we have no great way to express a player’s defensive worth through a singular number, so specific player categorizations are more open for debate. This makes comparing the worth of two players’ defensive impacts extremely difficult as discussed by Ben Dowsett. Which would be more impactful for a team defense: Gobert’s stalward rim-protection or Draymond Green’s ability to seamlessly switch 1-5? As always, the answer is that it depends. Defense can be broken down to four different categories: a defender who can shut down a single matchup (“Lockdown Defender”), a player who protects the basket effectively (“Rim Protector”), switch-happy players that can defend multiple positions and allow the team to switch more smoothly (“Chameleons” because they can blend in with any system), and players who can disrupt offenses off the ball by playing free safety, so to speak (“Roamers”). Before I can apply this theory to any specific player, it’s first necessary to define each level of grading on the above continuum. Starting at the bottom (now, where am I?), we have “Inadequate” which applies to a deficiency in the specific skill that significantly hurts the team. This is a bit tricky because some skills aren’t as important for certain positions such as rebounding and, to a small degree, defense for point guards while a center who isn’t a good rebounder would cause a net negative for his team. Scoring a “Sub-par” means that a player has a deficiency in a certain skill, but that deficiency isn’t as much of a concern as an Inadequate skill. Think of Andre Roberson’s free-throw shooting as a good example. It’s poor enough that teams can employ the “Hack-a” strategy against him which significantly hurts the Thunder; however, if he were just above this level where teams couldn’t target him, I would consider that “Sub-par.”

Being “Proficient” and “Average” are very difficult to differentiate between, but I would draw the line at reliability. A player who is “Proficient” in a specific skill is one who can, most of the time, execute that skillset. Players like J.R. Smith add an extra level of difficulty in this because he defies the reliability aspect of this definition; however, I would feel comfortable with him shooting open threes over most any “Average” shooters while the apex of his skillset is significantly higher than “Average” shooters.

Here’s where things get interesting and where teams are truly constructed. Players who fall within the “Elite” and “Transcendent” levels are those who are considered stars. Remember this: teams cannot be successful without “Elite” or higher skills in multiple skillsets (I’ll discuss which ones a little later). On a definitional level, these are the two easiest levels to differentiate between. A player with an “Elite” skillset means that they are one of the best in the league at the time that they are (were) playing at that skillset. Players who have a “Transcendent” skillset means that they are in the upper echelon of that skillset regardless of time. You could pluck them out of their temporal playing moment and plop them in any time period, and they would still be one of the best. Their ability “transcends” time.

Now we can get to the interesting part and apply these definitions to actual players to see what team makeups have been successful. Just as a reminder, players cannot be judged as a conglomeration of their entire careers. A player must be chosen during a specific year of their career that spans both the playoffs and the regular season. You can apply this to either one of the two, but you miss out by not judging a player based off the entirety of the season and post-season. In the next article, I’ll lay out how this will look for specific players.